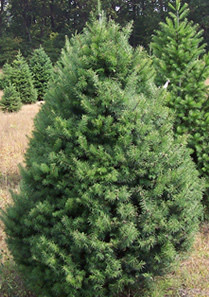 A tree species native to the mountains of the western United States has been the major Christmas tree species in the western United States since early in this century and today is popular throughout the United States. Its three-quarter to one-and-one-quarter-inch-long, flattened, soft, green to blue-green needles are attached individually around the twig and tend to radiate out in all directions. Douglas-fir foliage can easily be distinguished from blue spruce by the softness of the Douglas-fir foliage and by the flatness of the Douglas-fir needle, which will not roll between two fingers. The Douglas-fir can be distinguished from Fraser fir and Canaan fir by noting that (1) Douglas-fir buds are bullet-shaped with a sharp point, while those of Fraser and Canaan are round or ball-shaped; (2) the leaf scars left when the needles of Fraser or Canaan fir drop from the twigs are essentially flat, resulting in a relatively smooth twig, while those on Douglas-fir are raised stubs, not as obvious as the peg-like structures present on spruce, but still visible and producing a somewhat bumpy twig; (3) the white banding on the back of the needles of Fraser and Canaan is more prominent than that on Douglas-fir; and (4) when the foliage of Fraser or Canaan fir is crushed, it has a balsamic or turpentine aroma while Douglas-fir has a very mild, almost sweet smell. Among Douglas-fir's attributes as a Christmas tree are its strong natural symmetry, allowing the production of attractive trees with a wide range in density; its relatively soft, attractive foliage; and its very good needle retention once cut.﻿