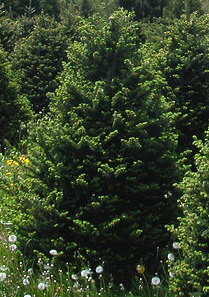 A tree native to the high elevations of the southern Appalachian Mountains is a fragrant, dark-green Christmas tree species whose popularity has increased dramatically in recent years. Fraser fir's one-half to one-inch-long flattened needles are attached individually to the twigs. However, unlike spruce, the needles of Fraser and other firs are attached directly to the twigs, rather than on peg-like structures as are the spruce. As a result, when the needles fall off a Fraser fir branch, the surface of the branch is smooth rather than rough or bumpy like the branch of a spruce. Also, the flattened Fraser fir needle will not easily roll between two fingers. The upper surface of Fraser fir needles is generally dark green with a visible groove down the center, while the lower surface is a lighter green with two silvery-white bands. The needles on the upper branches are somewhat pointed and tend to curl upward around the twigs in a U-shaped fashion, giving the branch a bottle-brush appearance, while the needles on the lower branches are blunter and appear to extend out from the twigs from the sides, giving the lower branches a flattened appearance. Among Fraser fir's strong attributes as a Christmas tree are its strong natural symmetry, allowing the production of attractive trees with a wide range in density; its relatively strong branches to support decorations; and its attractive, deep green, relatively soft foliage. Also the needle retention of cut Fraser fir is excellent, and it is among the most aromatic of Christmas trees species, producing the balsam aroma commonly associated with the Christmas holiday.