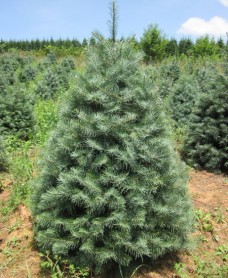 When cultivated on Christmas Tree plantations, the tree naturally forms a symmetrical triangle shape. The trees are full and dense with strong evergreen fragrance, and are known to be one of the longest lasting after being cut. In the forest the evergreen tends to form stands with other firs and beeches.[3] It is closely related to Bulgarian fir (Abies borisiiregis) further to the southeast in the Balkan Peninsula, Spanish fir (Abies pinsapo) of Spain and Morocco and Sicilian fir (Abies nebrodensis) in Sicily, differing from these and other related Euro-Mediterranean firs in the sparser foliage, with the leaves spread either side of the shoot, leaving the shoot readily visible from above. Some botanists treat Bulgarian fir and Sicilian fir as varieties of silver fir, as A. alba var. acutifolia and A. alba var. nebrodensis, respectively.